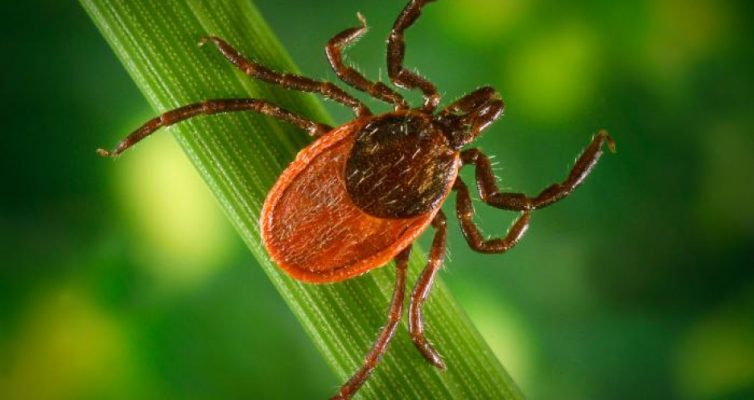 Lyme disease is a bacterial infection caused by the bacterium Borrelia burgdorferi. These bacteria are transmitted to you through the bite of an infected black-legged (deer) tick. There are three stages to Lyme infection.The first stage is called early localized disease. During this stage, symptoms include fever, chills, headaches, fatigue, swollen lymph nodes, and muscle and joint aches. A characteristic red rash develops at the site of the bite 3-30 days later (average is seven days) in 70-80 percent of people. Sometimes, but not always, this rash clears in the center as it enlarges, resulting in a target or “bull’s-eye” appearance. The rash can expand rapidly by 2-3 cm/day and has reached up to 70 cm, but most rashes are around 5 cm. Ticks prefer skin folds, so the armpit, region behind the knee, abdomen and groin area are common sites of rash.

If the infection is not treated, in certain patients it can progress into the second stage of Lyme infection called “early disseminated infection.” This usually occurs weeks to months after the tick bite. During this stage, the rash can spread to multiple sites within the body. Fever, joint pains and muscle pain can continue during this stage. In 4-10 percent of patients, Lyme disease can affect the heart, causing palpitations or a slow heart rate. Bell’s palsy (loss of muscle tone causing drooping on one or both sides of the face) can occur. Severe headache and neck stiffness, called meningitis, is also possible. Nerve pains, characteristically sharp, shooting, electric like pains, accompanied by numbness and tingling also can manifest during this stage.

The third stage of Lyme infection, late disease, happens in a minority of patients months to years after the infection. Painful and swollen joints, called Lyme arthritis, can occur. Often, only one or two joints are involved and usually the larger joints, such as the knee, shoulder and ankles, are involved rather than the small joints of the fingers or toes. Lyme disease during this stage may continue to affect the nerves. If the infection affects the brain, it
may lead to trouble with memory and concentration.

If you live in the Northeast and Middle Atlantic states from Virginia northward and the upper Midwest, you are at most risk for Lyme infection. Infections also can occur in Northern California and the Pacific Northwest to a lesser extent. Infections occur most often in people who spend time outdoors in the late spring and early summer. Infection is less common but possible in the autumn and in early- to mid-spring. The risk of tick bites is lowest during the late summer and winter.

Rheumatologists are doctors who are experts in diagnosing and treating diseases that can affect joints including infections such as Lyme disease. Sometimes other types of arthritis syndromes can mimic Lyme disease. Primary care physicians and infectious disease doctors also diagnose and treat this condition.

Current guidelines recommend a two-tier testing approach as the most accurate way to detect Lyme disease. The first test, called an ELISA, is a screening blood test that looks for certain antibodies (immune proteins) that are the immune system’s response to exposure to the Lyme bacteria. The second test, a Western blot, confirms positive (abnormal) or borderline ELISA results. No lab test is perfect and sometimes these tests can be difficult to interpret. For example, in the early weeks of infection, the blood tests can be negative. Also, patients with other infections or autoimmune diseases can have a positive Lyme screen without truly having Lyme disease, called a “false positive” test. It would be exceedingly rare for patients with late-stage disease, causing swollen joints, heart, or nervous system involvement, to have a negative confirmatory test (Western blot). If a joint is swollen, it is also possible for rheumatologists to aspirate the joint fluid and send it to the lab to see if there is evidence of Lyme infection within the joint fluid.

Learn more about treatment options for Lyme Disease in the continuation of this article found on WashingtonArthritis.com in our latest edition of Rheumors.