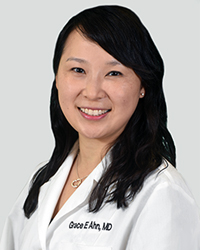 Dr. Ahn was born in Korea and came to the U.S. in her early teens. She grew up in Virginia where she attended the University of Virginia as an Echols Scholar with a major in music and a minor in Biology. There she earned her B.A. degree with Distinction in 2001. Upon graduation, she spent a year participating in basic research at the National Cancer Institute before enrolling at Virginia Commonwealth University School of Medicine, receiving her medical degree in 2006. Dr. Ahn completed her internship at Drexel/Hahnemann University in Philadelphia, PA. Her internal medicine residency was at Northwestern University in Evanston, IL where she served as Chief Resident. She remained at Northwestern for her rheumatology fellowship in Chicago, IL.

Dr. Ahn has received multiple scholarships and awards throughout her academic and medical careers, including Intern of the Month during residency and fellow teaching awards.  Dr. Ahn was recognized as a “Top Doctor” by the Washingtonian magazine in 2021.  She has been first author and co-authored several articles and abstracts, and presented research at regional, national, and international conferences, including the American College of Physicians, the American College of Rheumatology, and Osteoarthritis Research Society International. She has had publications in medical journals including an article on physical activity and systemic lupus erythematosus was published in Arthritis Care & Research.

Dr. Ahn is married to a colon and rectal surgeon and has two children. She enjoys playing the piano, traveling, and spending time with her family. In addition to English, she is fluent in Korean.

Accepting patients at both our Fairfax, and Wheaton facilities. The minimum age group accepted is 18 years.

“I was very impressed with Dr. Ahn. This was my first appt & her exam was very detailed & thorough. She spent nearly 1 hr with me. I am most appreciative.”
~ Carmine V.