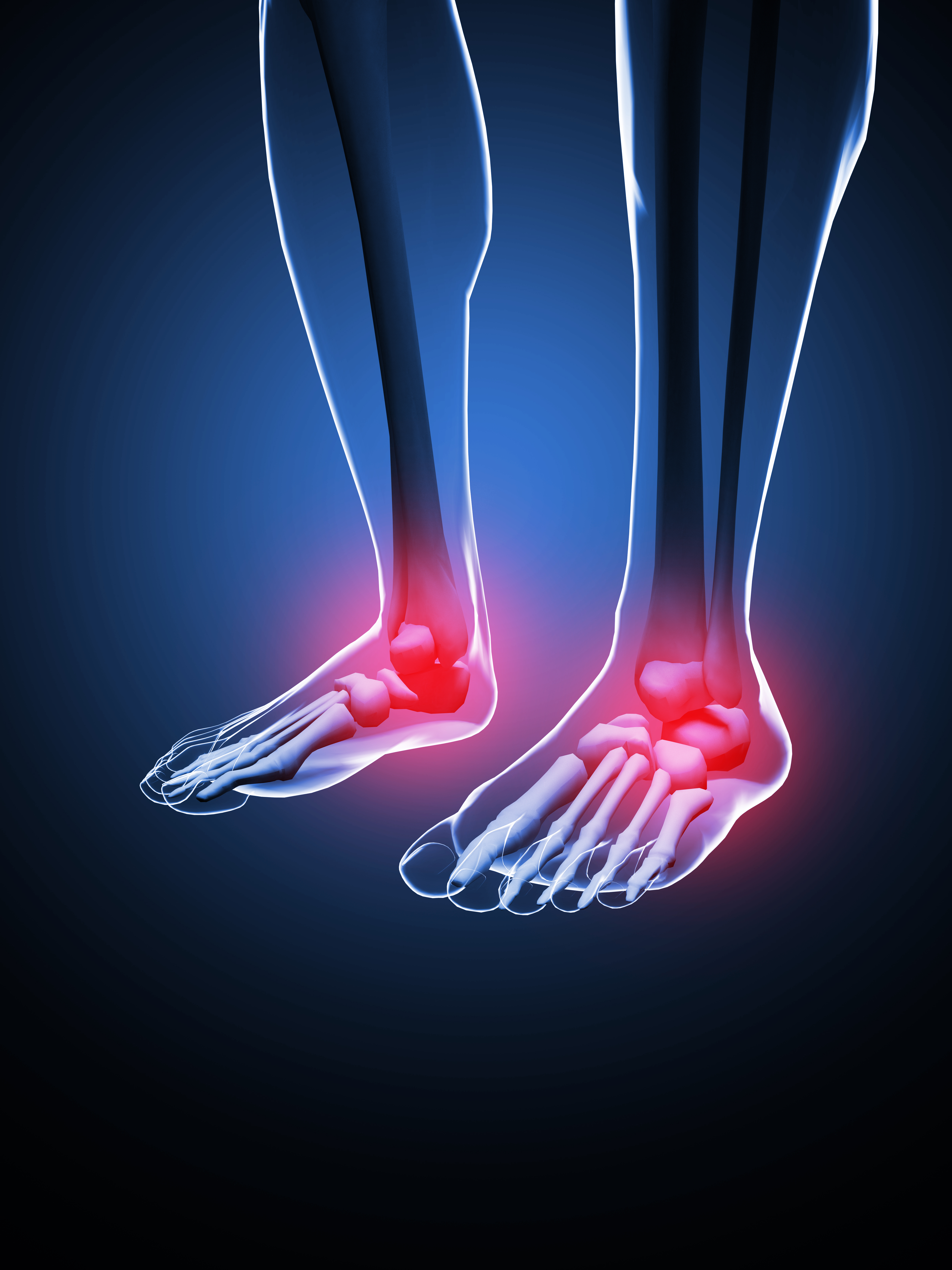 Most foot pain is usually due to degenerative (wear and tear) arthritis or mechanical pain (overuse, poor foot biomechanics, muscle imbalances, poor training techniques or incorrect footwear). However, you should be aware that another common cause of foot pain could be due to an inflammation.

Often times the swelling and inflammation may be a subtle finding requiring further evaluation with X-rays or MRI. Lab work may also be needed to investigate the presence and causes of the inflammation. When arthritis is due to inflammation is it commonly called inflammatory arthritis. This means that your immune system attacks your joints and causes swelling and pain. When your immune system attacks itself this is commonly referred to as an autoimmune disease.

Gout is caused when uric acid, a substance that is normally secreted in the urine, forms needle-like crystals in the joints. Sometimes your body either produces too much uric acid or your kidneys excrete too little uric acid. When this happens, uric acid can build up, forming sharp, needle-like crystals in a joint or surrounding tissue. The immune system then tries to eat up these crystals and the result of this is pain, inflammation and swelling.

Gout causes sudden, severe attacks of pain, redness and tenderness in joints, often the joint at the base of the big toe. If not treated, over time this inflammation causes damage to the joints leading to chronic pain and deformity. Gout is often treated with a combination of anti-inflammatory medications and medications to lower uric acid levels.

Rheumatoid Arthritis is autoimmune disease in which the immune system attacks the lining of the joint called the synovium. Over time, the inflammation in the synovium produces factors which cause damage or erosions which lead to deformity and disability. Often foot pain may be the very first symptom of rheumatoid arthritis and may be the first place where rheumatoid joint damage (erosions) is detected. Patients with rheumatoid arthritis foot pain often complain of pain in the balls of their feet, especially worse in the mornings.

Patients may also develop rheumatoid nodules on their feet as well which can be additionally deforming. Treatments for rheumatoid arthritis decrease inflammation and stop damaging erosive changes and therefore are referred to as disease modifying antirheumatic medications (DMARDs).

Psoriatic Arthritis is autoimmune disease that is associated with a skin condition known as psoriasis. Usually patients have psoriasis preceding the onset of arthritis by several years. The psoriasis in some cases may be a subtle finding and patients often have abnormal nail findings. In psoriatic arthritis the immune system attacks the joints, tendons and ligaments. The joints of the foot may be affected by psoriatic arthritis in a similar way to rheumatoid arthritis.

Patients may also present with diffuse inflammation of the toes known as sausage digits. Another common area of pain is when the tissue on the bottom of the feet is inflamed known as plantar fasciitis. Medications are very helpful for both the treatment of psoriasis and psoriatic arthritis. It is important to promptly recognize and treat inflammatory causes of foot pain as this can prevent progressive damage to the joints of the feet. Also, given that the foot will not be the only joint affected, prompt treatment may spare damage to other joints that may become involved.