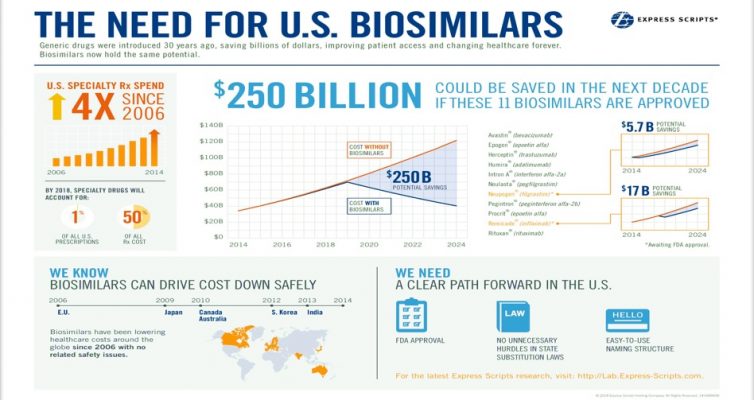 In case you missed it, a new kind of medicine recently arrived in rheumatology: the biosimilar.

What exactly is a biosimilar? Well, you may know what biologics are – medicines that are given as injections or infusions for rheumatoid arthritis, psoriatic arthritis and other autoimmune diseases that have been in use since the late 1990s. Think of biosimilars as a little like a “generic” version of biologic drugs. The difference between a generic and a biosmilar is that a generic contains the exact same active ingredient as its brand name drug, whereas a biosimilar is proven to be highly similar to its brand name biologic, yet can have slight differences that do not have an effect on the way the drug works. Slight differences are expected due to the large size and complexity of biologic drugs.

Where do biosimilars come from?

Between 1998 – when the Food and Drug Administration (FDA) approved the first biologic drug for rheumatology – until 2010, biologics manufacturers enjoyed patent exclusivity without any chance of market competition.

In 2010, in an effort to reign in the high costs of drugs, Congress granted the FDA new authority to approve biosimilars through an abbreviated pathway. The FDA approval process for biosimilars is much more rigorous than for generics, because biologics are much more complex than previous “small molecule” drugs (such as pills). Regulators review data from advanced analysis in the laboratory and at least one clinical trial in patients to confirm that a biosimilar works as well as the brand name biologic, through the same mechanism of action, and without additional side effects compared to the brand name biologic.

The FDA has approved 9 biosimilars as of this writing (March 2018), but due to patent disputes and manufacturer decisions, only 3 of them are available. Two are biosimilars to Remicade (Inflectra and Renflexis) and the third is an oncology drug (Zarxio).

What can I expect if I start taking a biosimilar?

There are two scenarios in which people can start taking a biosimilar. First, a person currently taking a brand name biologic (such as Remicade), can begin taking the biosimilar (such as Inflectra or Renflexis). Or, a person who is currently not taking a biologic drug can simply start taking a biosimilar. In both instances, patients and doctors can expect that the biosimilar will work equally well – akin to a new “batch” of the biologic from a new source. This expectation comes from the rigorous FDA approval process, numerous clinical studies, and also experiences from other countries where biosimilars have already been used for several years. And biosimilars, like all drugs, are being monitored by the FDA, doctors and electronic registries for any unexpected side effects.

Where can I get more information?

A good way to learn about biosimilars is to ask your doctor. You can also check online resources at the FDA, or my blog at the American College of Rheumatology’s SimpleTasks site here.